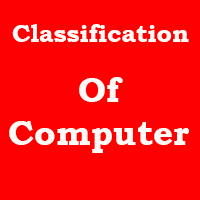 Computers are available in many sizes and types and also can fit in the palm in our hand to those computers that occupied  the entire room. Computer are used in different sectors and may be differ according to speed, storage, capacity, size and nature. It may be special purpose and general purpose.

General Purpose computer are versatile and diligent which performs in most of the sectors.

It is classified into four different types.

1. On the basics of working principle

There are three types of computer on the basics of working principle.

Analog computer is the special purpose computer. It represents the data ans physical quantities such as current , pressure, temperature, voltage etc. They were especially useful in the simulation and evaluation of dynamic situations such as flight of a space capsule or the changing weather patterns over a certain area. The accuracy of analog computers are low.

Digital computer is the general purpose computer, it uses discrete data like letters, numbers , symbols etc. and process data in binary digits i.e 0s and 1s. It can be also powerful computers like super, mainframe, mini and micro computers. . It performs task to control industrial process and regulate the operations of machines, analyze and organize vast amount of  business data and simulate the behaviour of dynamic systems. They are faster and accurate as compared to analog computer.

The combination of computers which is capable of processing in both analog and digital signals. It accepts input in the form of analog signals , process data digitally and gives output either digitally or analog form. They are used in industrial application, airplanes, ships hospital etc. The widest application of hybrid computer take place in situation which require real time solutions. Example: ECG (Electronic Cardio Graph).

Difference between Analog and Digital Computer

2. On the basics of Size

Mainframes are large  powerful and expensive computers used mainly by large companies for bulk data processing, commercial data processing and other large scale operations such as bank transactions. It may have hundred or even thousand of terminals. Its word length is more than 64 bits. IBM built first mainframe computer in 1964. The main difference between supercomputer and mainframe computer is that super computer channels all its power into executing a few programs as fast as possible whereas as mainframe uses its power to execute many program concurrently. It was developed by J. Presper Eckert and John Mauchly in 1951.

Mini Computer are also multi user computer like mainframe computer. They are smaller than mainframe computer. A minicomputer may have hundred or less number of terminals. It is typically used for middle sized business who needed more power and memory that could be obtained with micro computer. They can process more data and support more Input and Output devices. It is also called Mid Ranged Computer. It was developed by Kenneth H. Olsen in 1965.

Micro Computer is a small sized personal computer that designed for an individual having a microprocessor inside it.  These computers are called micro because of the use of microprocessor as processing unit.

There are different microcomputers :

3. On the basics of Brand

IBM stands for International Business Machine. It is made by IBM company  by established by Dr. Herman Hollerith in 1923 AD. These computers are more expensive , more reliable, durable. It is also called IBM branded computer. It is famous for data processing and store.

Compatible means able to exist together. The components are developed by different companies and finally they are assembled and a computer is made. It is also called IBM assembled PC.

It is one of the largest computer manufactures which is in USA It has many PCs with good qualities and user friendly.

4.On the basics of model

AT stands for Advanced Technology and these computers are based on GUI (Graphics User Interface). Their I/ O device are flexible and faster.. It has processor and large storage capacity, complex calculation. Example: Pentium 80286 / 386 / 488.

PS stands for Personal System. It is refinement of AT computer. It was developed after 1990. It runs on battery. They have faster I /O devices and uses GUI based software.

What is Mobile Computing?

It is a generic term describing one’s ability to use technology while moving as opposed to portable computers. It is a technology that allows transmission of data via a computer, without having to be connected to a fixed physical link is mobile computing. 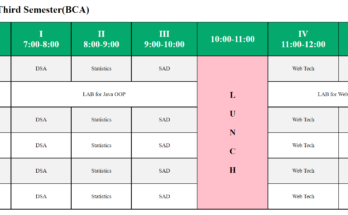 2 Comments on “Classification of Computers”