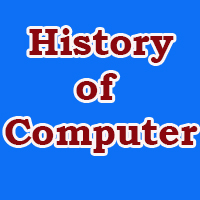 It is the earliest calculating device invented by Chinese people around 3000 BC. It is rectangular wooden frame structure. Frame is divided into two parts with mid bar. Upper part is called heaven and lower part is called earth. The upper part contains 2 beads (represents value 5) and lower part contains 5 beads (represents value 1).

William Oughtered, an English mathematician invented a machine called Slide Rule in the year 1620 AD. It had 2 rulers engraved with numbers and people could use for multiplication and division also for roots, logarithms. It is first analog computing device.

Charles Babbage was a professor of mathematics at Cambridge University. He invented Difference engine and it used to work with steam in the year 1822 AD. Then in the year 1833 AD he invented Analytical engine, it was interconnected maze of gears, cams. But he was unable to complete due to lack of technology. Analytical engine used to work in IPO (Input Process and Output) So, he is called as father of computer science.

In 1937, Howard Aiken, a professor of Harvard University developed an Electro-Mechanical Computer called Mark-I. This computer was originally called ASCC(Automatic Sequence Controlled Calculator) later it was named as Mark-I.  It was 51 feet tall, 8 feet high and 2 feet wide with 500 miles of wire , 32 tons of weight. It consumed a lot of heat and electricity.

It was constructed with high speed electromagnetic relays instead of electro-mechanical. It had built in hard for several functions such as reciprocal, square roots, logarithm , exponential and some trigonometric functions.

It was first electronic digital computer. This computer was designed by Dr. John Vincent Atanasoff and Clifford Berry in 1942 AD. It used 18000 valves as main memory.

It was the first general purpose electronic computer developed by John William Mauchly and John Presper Eckert in 1946 AD.  It was 10 feet high and occupied about 1000 sq feet, weight to 30 tons, it used 18000 vacuum tubes. It consumed a lot of heat and electricity.

He was the mathematician. He discovered stored program technology. In 1945 AD. He also discovered that Binary number system should be used in computer processing.

It was developed by Maurice Wilkes and his team .. It used 3000 vacuum tubes. Input was given by paper tapes and output by the teleprinter.

It was the first stored program computer designed by  J.W. Mauchly and J.P. Eckert in the year 1952 AD. It was binary serial computer with automatic addition, subtraction, multiplication programmed division. Magnetic tapes was used to store data and instruction.

It was first general purpose electronic digital computer made for commercial use developed by J.W. Mauchly and J.P. Eckert which was 8 feet high, 15 feet long and its weight was about 15 tons.

History Of Computer in Nepal

History of computer in Nepal is not much old. An electronic calculator called ‘Facit’ was used to prepare the census in 2018 BS, it took long time to complete calculation (about 6 years).

In the year 2028 BS Government of Nepal brought IBM 1401 (Second Generation Computer) on rent to do the census calculation, it also took 1 year 7 months and 15 days to do the calculation.

Another computer was also brought in Nepal ICL 2950/10 (fourth Generation computer) in 2038 BS to do census calculation. It tool 1 year and 3 months to do calculation and its kept in the museum of National Computer Centre(NCC) Singh Durbar.

In the year 2031 BS EDP(Electronic Data Processing) centre was formed  later it was renamed to National Computer centre. Government of Nepal formed High Level Commission for Information Technology under chairman ship of Prime minister. IT policy was formed in 2057 BS. IT park with all infrastructure for IT companies is constructed. Also Government issued Electronic Transaction Act-2061 was formed. It is Cyber Law of Nepal. Computer Association of Nepal (CAN) was established in 1992.