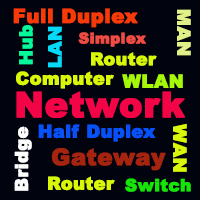 A group of computers and peripherals connected together to enable a group of user to share and exchange the information. Computers network facilitates the sharing of hardware and software resources among different users working on different computers. The computer of a network may be connected with cables, radio waves, satellites of infrared light beams.

Based on Geographical Spread of Network

It connects network devices over short distance geographically close together which is in the same building or room. It consists of two or more computers with in a limited area. The main purpose of LAN is to sharing of resources. It is typically owned and managed by a single person or organization. The communication medium is coaxial cable.

It is the network which is larger than a LAN and interconnects user with computer resources in a geographical area or larger that covered by LAN. It is a network of computers which are spread over a metropolitan area such as with in a city. It connects two or more LAN together. The communication medium is PSTN or satellite link. Examples: Cable TV network.

It is a geographically dispersed collection of LANs, a network system of connecting two or more computers generally across a wide geographical area such as cities or countries. The transmission medium is usually spanning or covers a regional national or global area. The communication medium may be coaxial cable, PSTN, optical fiber, wireless Example: Internet

It is a LAN based on wireless network technology. It is most popular means of communicating data without wire with in a fixed area or location. A router transmits an internet connection coming from ISP and delivers that service to nearby devices like mobile.

Based on Services in a Network

It is a network in which server provides services to clients.

There is at least one server providing central services.

It is a network in which resource sharing, processing and communications 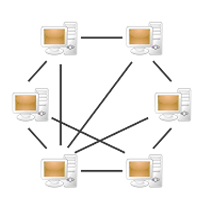 control are completely decentralized. All clients on the network are equal in

terms of providing and using the resources . They all run on same networking

protocols and software. These are kept physically near to each other.

It allows sharing of files, printers and other resources in both directions(downloads or uploads).

There are three transmission mode

The information is communicated in only one direction i.e radio or Television only can transmit but it cannot receive.

The information is bi-directional i.e they can transmit and receive but not simultaneously , they can receive or transmit at a time. For example walkie talkie.

The information in full duplex is simultaneous i.e it can receive and transmit the information at a time. For eg: Telephone system.

The configuration of the devices in a communications network is called the network topology / network architecture. It includes all the hardware that makes up network by the station are called nodes or workstations.

There are different types of topology.

It is common network setup where the computers and other network devices on the network are connected to central computer also known as hub.  The  configuration is done with the help of Optical Fiber cable, Twisted pair cable or a coaxial cable.

Packet is a container or box that carries data. It represents smallest  amount of data that can reverse over a network.

Node is a point of connection with in a network.

Token is a special frame that is passed from node to node around a ring network.

It is simplest topology that is used in the network. It is reliable in small network. , it has single cable acting as backbone called trunk. In Bus topology only one computer can transfer information at a time.

Simple architecture and suitable for small offices buildings or rooms.

In this type of network architecture all the computers are connected to each other.  Each nodes acts as transmitter and receiver, data is transferred on one direction only.  Data transferred from one node to another handling every packet, each packet is sent around the ring until it reaches to its final destination.

Single cable connection between the devices. 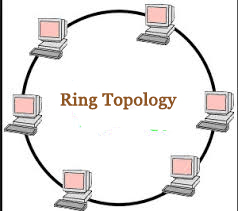 Can use optical fiber to increase speed and to reduce problem.

A repeaters receives a single before it becomes too weak, it amplifies the data signals before sending them on to the up linked segments. It operates only in the physical layers.

Hub is a broadcast device which also operates in the physical layer. It is small, simple and less costly device. A cable connects the network cards on each device hub available today supports the Ethernet standards. There are three types of hub: Active , Passive and intelligent hub. Active hub regenerates or amplify the signals and passive hub do not amplify the signal.  Intelligent hub performs variety of processing functions including network management, routing , switching etc.

A bridge is a networking device that filters data traffic at a network boundary.  It operates in the physical layers as well as data link layer. It has filtering capacity. Bridge inspects incoming traffic and decides whether to forward or discard it.

It is an internet working device that connects two dissimilar network. It translates information between different network data formats or network architecture.

It is a networking device which works same job as the hub, which connects network device and make them act as a single network. When switch receives a data packet, it examines the data address , the sender and receiver and stores.  It can be also used as a repeater. 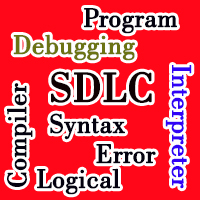 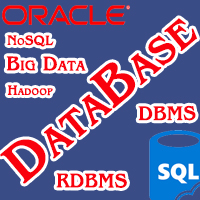